The Valley Of The Geysers

Although the weather can still be quite cold here in Iceland, that mild inconvenience doesn’t discourage people from visiting. For them, being able to witness the otherworldly landscapes covered in snow is a unique experience in itself—a true sight to behold.

The Haukadalur valley is one of those very places that attracts groups of tourists in a relentless fashion regardless of the weather. It’s here that the inactive geyser Geysir, which gives its name to this natural manifestation, and the powerful Strokkur lie just a few steps away from each other. Underneath the earth, an intricate maze of pipes houses a constant flow of water, which is heated up by the surrounding rocks. When the geothermal heat has caused the temperature of the water to rise to its peak, this underground canister pours its content out in a massive explosion. Such is the pressure that the stream of water sprouting out of Strokkur every eight minutes can reach up to incredible heights—even 30 meters! 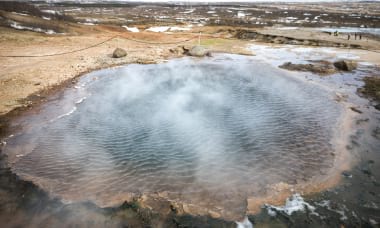 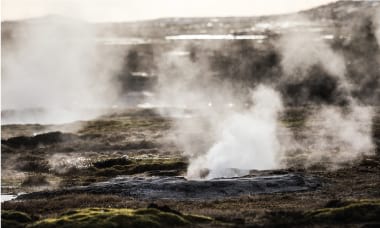 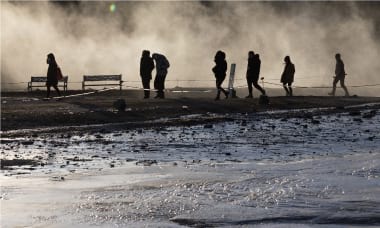 The sheer anticipation of it all

Entering the field is almost a surreal experience. As we walk in, the heat emanating from beneath our feet keeps us warm in the harsh winds. Boiling mud pits are scattered all around us, ablaze with streams of yellow and deep-orange soil. The sulphuric smell stay with us for the entire time, and while it might not be the most pleasant, it makes us realise how active and powerful the earth below us is.

A small man-made, wooden path takes us straight to the geysers, and we’re carefully not to step outside of its boundaries. This area has been deeply affected by over-tourism and it’s therefore important not to further damage the vulnerable flora and fauna that surrounds the area by stomping it en masse. Furthermore, the water that flows out of the geysers is extremely hot, and it would be a grave mistake to touch it or step in a puddle!

As we approach, groups of people stand in a huge circle around Strokkur, the atmosphere of sheer anticipation so evident and palpable you can cut it with a knife. With selfie-sticks ready in their hands, people are waiting for the great eruption, counting the minutes with accelerated heartbeat.

Finally, the water at the rim of the geyser begins to boil violently, rising slowly from the earth. Then, amongst the applause and the impressed sighs of the audience, an immense jet of water explodes upwards towards the sky—a candid stream of a thousand drops reaching for the clouds. People have only a dozen of seconds to take pictures, and as the water disappears again in the depth of the earth, mesmerised travellers gather once again around Strokkur, expectant, waiting for yet another magical explosion.

If you want to check out Geysir during your stay in Iceland, Reykjavík Sight Seeing offers a variety of tours depending on your budget and schedule. Check out their day tours leaving from Reykjavik! 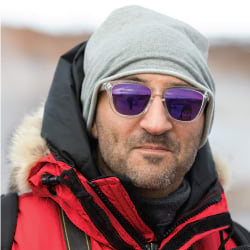 What brought you to Iceland? “I work for a tour company and I’m here with a group of twelve other people from Italy,” Andrea explains. “We’re touring Iceland together. We start from here and in ten days we try to see all your beautiful island!”

What have you been doing so far? “We’ve only arrived yesterday night,” Andrea chuckles. “We’ve been to Þingvellir this morning and visited the National Park and now we’re here! It’s our first time in Iceland but so far we love it.”

Have you ever seen a geyser before? “No, I haven’t seen it yet, that’s why we’re here!”

So what are you expecting? “A big explosion,” Andrea says, beaming. “A big natural wonder!” 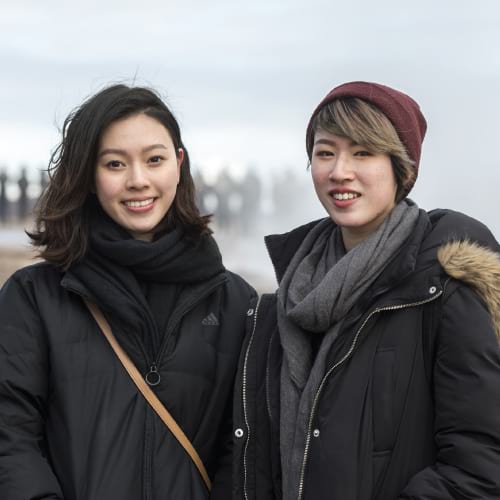 Names: Lisa and Cindy.
From: “We’re both from Australia but I live in Sweden on an exchange right now,” Lisa says.

What brought you to Iceland? “I came over to Europe to visit her on her exchange,” Cindy turns to her friend. “But then we decided to come to Iceland because she is turning 21!”

And how long have you been here? “Only three days, but it’s been absolutely beautiful so far and the polar opposite of our home country. We don’t really get snow unless it’s human made!”

What’s your favourite thing about Iceland so far? “I think the landscape,” Lisa says. “Every time you look around you, you can see something new and indescribable, which you can’t really see where we come from, especially because we live in the suburbs.”

So what did you think of the geyser?  “It was cool! We just saw the bubble gathering at the rim first and then it erupted all of a sudden,” Lisa says. “It was crazy, with all that blue water coming out!”

What’s next on the agenda? “I think we’re going to see some waterfalls and then we’ll go to Vík and the black sand beach,” Lisa says. “Oh and we’ll attempt to see the Northern Lights I think,” Cindy adds with a laugh.

Occupation: I work at the Litli Geysir Hotel, a short walk away from the geysers. When they were young, my great-grandmother and great-grandfather took over an old building in the area, which had burned down, and they turned it into a hotel. I started helping out here at a very young age.

How has the area changed as you were growing up? I have seen the influx of tourists, the numbers growing each year. Nowadays, there are visitors here every day, no matter what kind of weather it is, so it’s quite different to me. Growing up here was a really amazing experience. Back then, I could walk around the countryside freely and without boundaries. I was always looking for something to do and the nature gave me a lot of inspiration to get my imagination going.

THESE TOURS INCLUDE STOP AT GEYSIR