See some of the most beautiful gems of Icelandic nature while riding in a Super Jeep. These jeeps, with their distinctive massive tyres, are a unique Icelandic invention enabling the locals to traverse rugged terrain, ford rivers and drive across glaciers. It´s a fun ride and of course the view from them is spectacular. 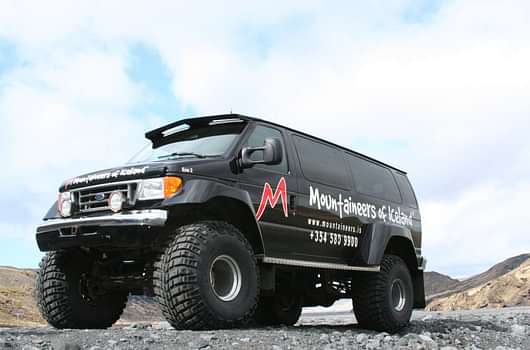 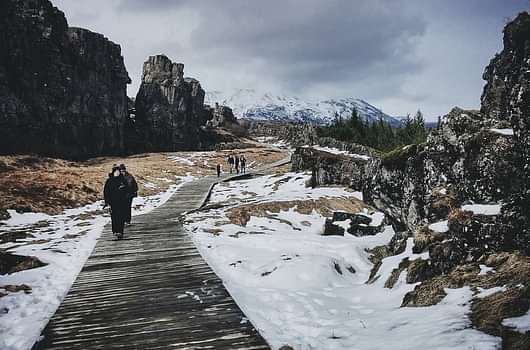 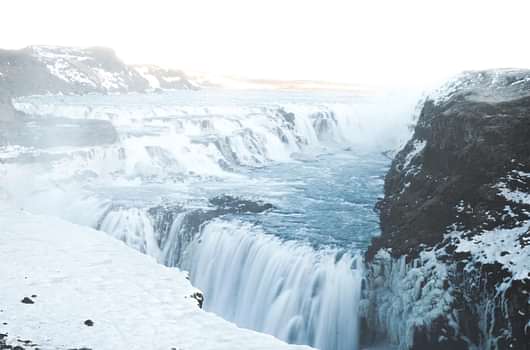 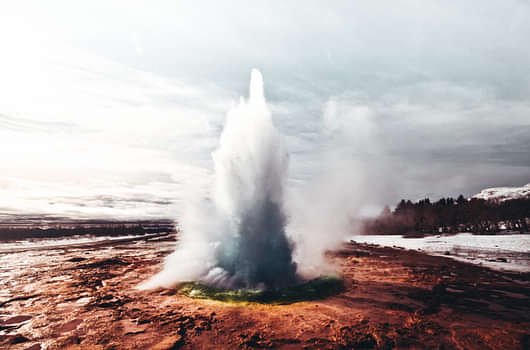 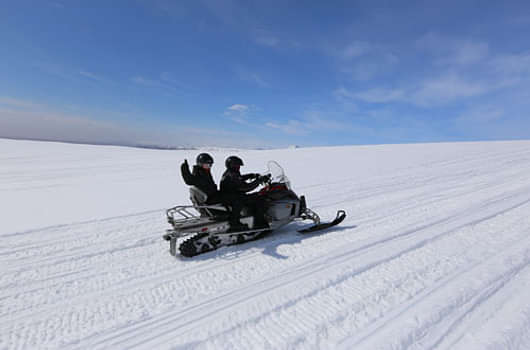 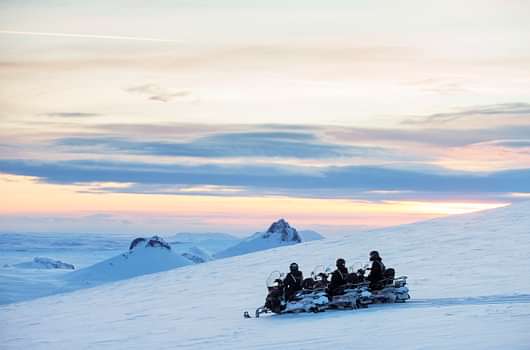 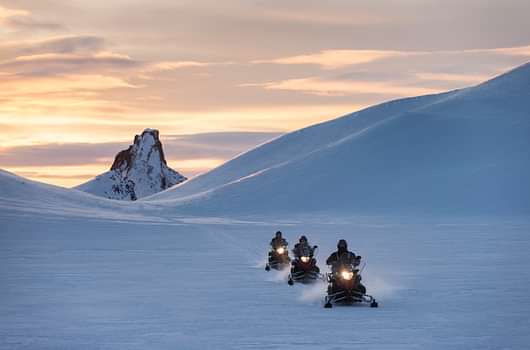 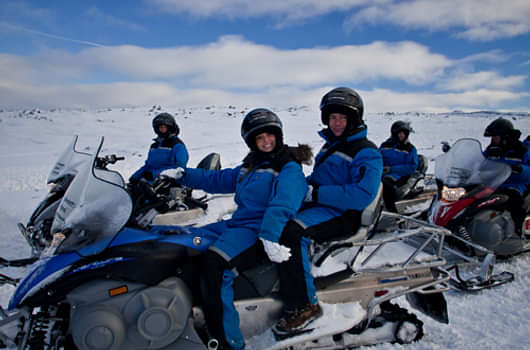 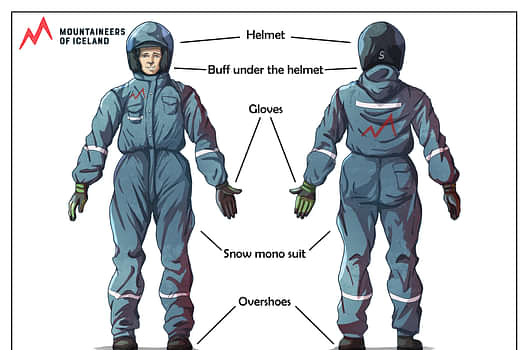 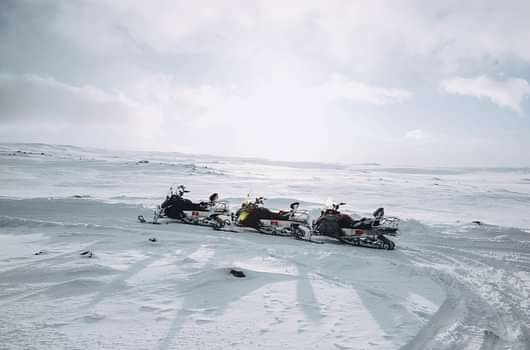 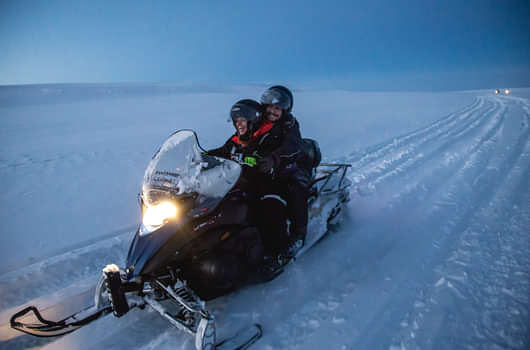 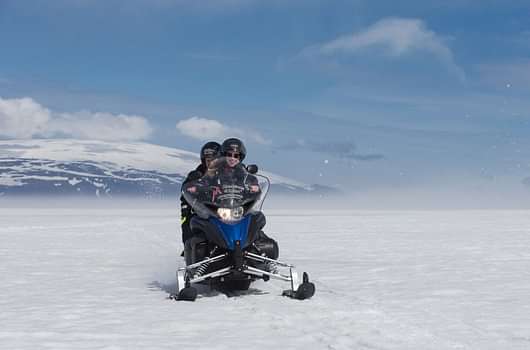 Specially customized Super Jeeps with their massive tyres are a unique Icelandic invention, the locals ingenious way of traversing rugged terrain, fording rivers and driving across glaciers. These vehicles have even successfully crossed Antarctica. Riding in one of them is a special treat and a fascinating insight into jeep culture in Iceland. Driving in our Super Jeeps we get to see the spectacular spouting geyser & hot springs, experience the magnificent Gullfoss Waterfall and walk in the footsteps of Vikings down the lava canyon where the American and European continents have been pulling apart in Þingvellir National Park. Then step aboard a Super Truck and drive into the glacier-covered central highlands where you get to ride across one of the biggest glaciers in the world on an amazing snowmobile tour!

The tour starts with a visit to Þingvellir National Park, a UNESCO World Heritage Site listing and the birthplace of the longest running parliament in the world. This is also where the great continental plates of America and Europe have been pulling apart and the resulting rift valley between them is clearly visible on the shores of Iceland´s biggest lake.

The next stop is at Geysir Hot Springs, the home of the original geyser and one of the most photographed places in the world. Here the ground trembles and super heated water & steam erupts spectacularly into the sky from the spouting Strokkur geyser every few minutes.

Next we stop for a leisurely walk down to Gullfoss Waterfall. This is where the powerful Hvítá glacier river cascades down 32 meters on two levels into a narrow canyon with a thundering roar.

Where the central highlands start, with its untouched pristine nature, you board one of our custom-made Super Trucks, capable of driving across rugged terrain thanks to its enormous tyres. The drive to the snowmobile base camp at the foot of the Langjökull Glacier is a unique Arctic Highland experience and the snowmobile tour that follows is definitely a once-in-a-lifetime adventure.

Ride across the eternally frozen snow and ice fields of one of the biggest glaciers in the world on a guided snowmobile tour, exploring one of the last true wilderness areas in Europe and indeed the world.

This is one of our all-time favourites and a classic Icelandic day tour.

DETAILS ON THE TOUR

Price & Availability: See booking window on right
Available all year round (depending on weather)
Min: No minimun participants
Age limit: 6 years
Pick up: Is operated by Mountaineers of Iceland and starts 30 minutes before departure time
Bring with you: Dress according to weather. In Iceland it is always wise to dress in warm, waterproof clothes. Weather changes can be sudden so expect the unexpected. Bring a waterproof jacket and pants, headwear and gloves. Good outdoor shoes are recommended.
Duration: Approx. 10
Local Tip: Upgrade your tour to “Single Rider” on the snowmobile for more driving time on the glacier.

Golden Circle super jeep tour
Snowmobile tour (also called “snow scooters”) on Langjökull Glacier with shared ride (two per snowmobile).
At the snowmobile base camp we supply you with super-warm glacier clothing, including a snow suit, gloves and balaclava, as well as all safety gear such as a snowmobile helmet.

Capital of Iceland. We pick up passengers from various Bus Stops and accommodations in downtown Reykjavík an in the surrounding area around the capital.
Note that pick-up starts 30 minutes prior to departure.

Þingvellir is a national park in the municipality of Bláskógabyggð in southwestern Iceland, about 40 km northeast of Iceland's capital, Reykjavík. Þingvellir is a site of historical, cultural, and geological significance, and is one of the most popular tourist destinations in Iceland. The park lies in a rift valley that marks the crest of the Mid-Atlantic Ridge and the boundary between the North American and Eurasian tectonic plates. To its south lies Þingvallavatn, the largest natural lake in Iceland. Þingvellir is associated with the Althing, the national parliament of Iceland, which was established at the site in 930 AD. Sessions were held at the location until 1798. 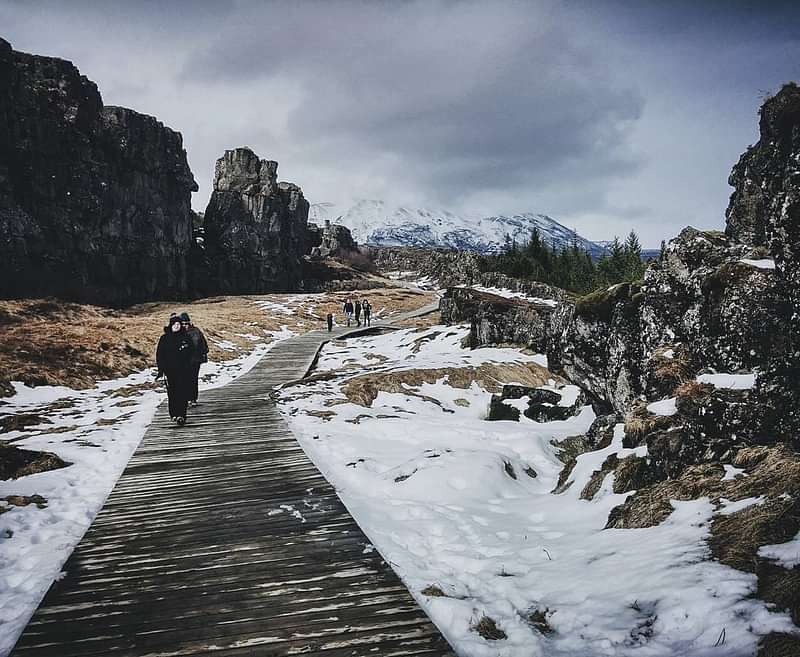 Geysir, sometimes known as The Great Geysir, is a geyser in southwestern Iceland. It was the first geyser described in a printed source and the first known to modern Europeans.[citation needed] The English word geyser (a periodically spouting hot spring) derives from Geysir. The name Geysir itself is derived from the Icelandic verb geysa ("to gush") the verb from Old Norse. Geysir lies in the Haukadalur valley on the slopes of Laugarfjall hill, which is also the home to Strokkur geyser about 50 meters (160 ft) south. Eruptions at Geysir can hurl boiling water up to 70 meters (230 ft) in the air. However, eruptions may be infrequent, and have in the past stopped altogether for years at a time. 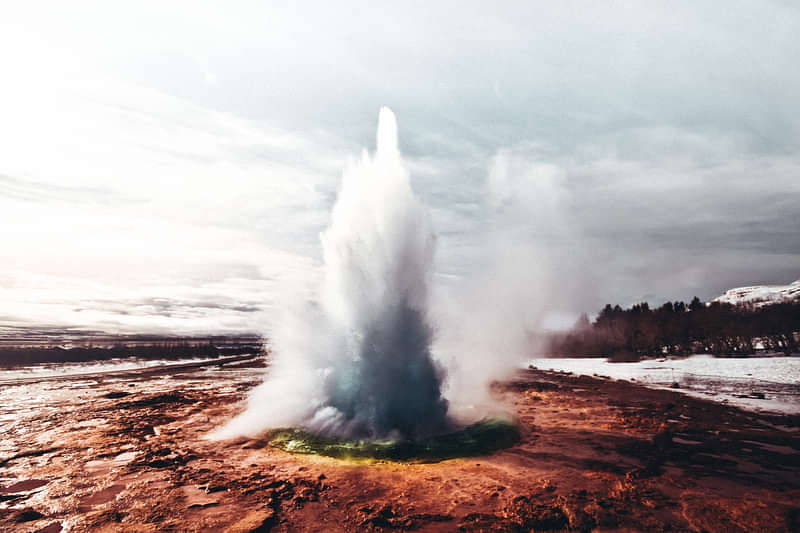 Gullfoss ("Golden Falls") is a waterfall located in the canyon of the Hvítá river in southwest Iceland. This river flows from the Langjökull Glacier which is the same as the one you are about the drive on in your Snowmobile tour. Lake Hvítárvatn can be seen in good visibility from Langjökull Glacier.

Langjökull (Icelandic for "long glacier") is the second largest ice cap in Iceland (953 km2), after Vatnajökull. It is situated in the west of the Icelandic interior or Highlands of Iceland and can be seen clearly from Haukadalur. Its volume is 195 km³ and the ice is up to 580 m (1,900 ft) thick. The highest point of the ice cap (at Baldjökull at the northern end of Langjökull) is about 1,450 m (4,760 ft) above sea level. 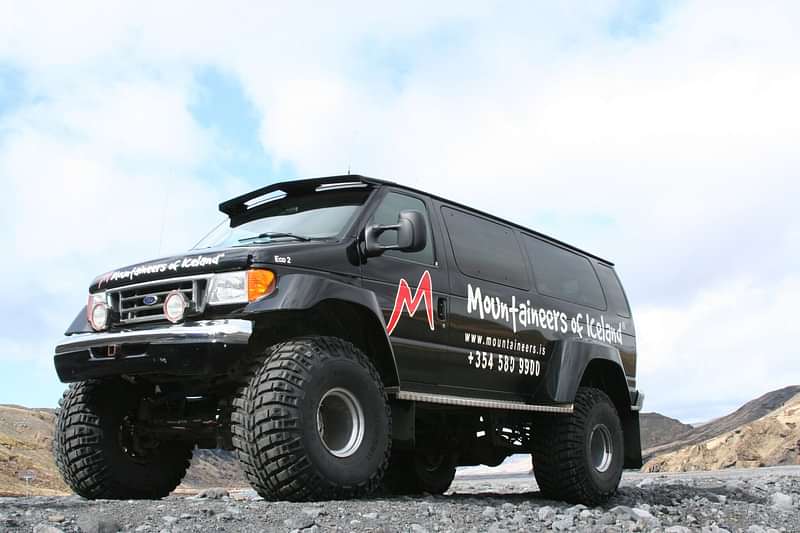 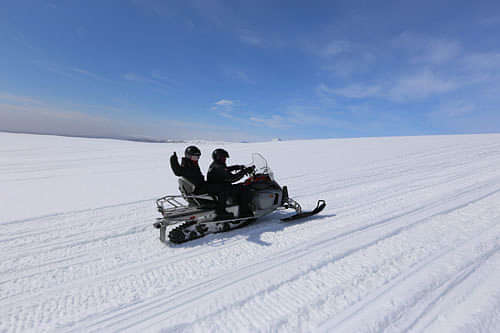 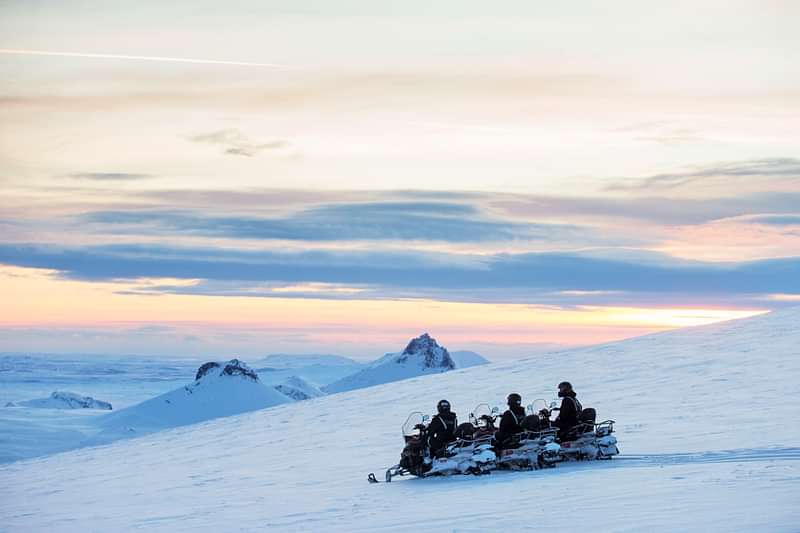 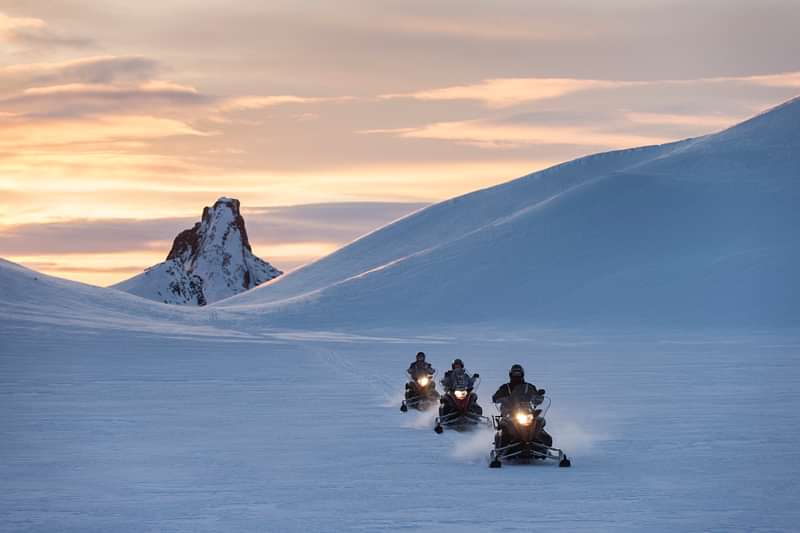 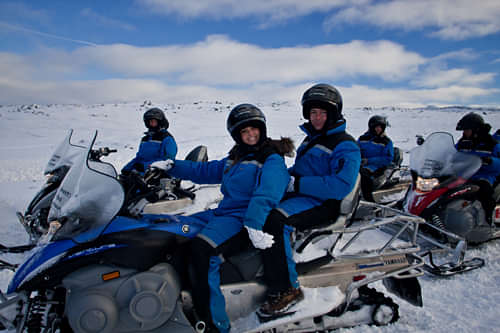 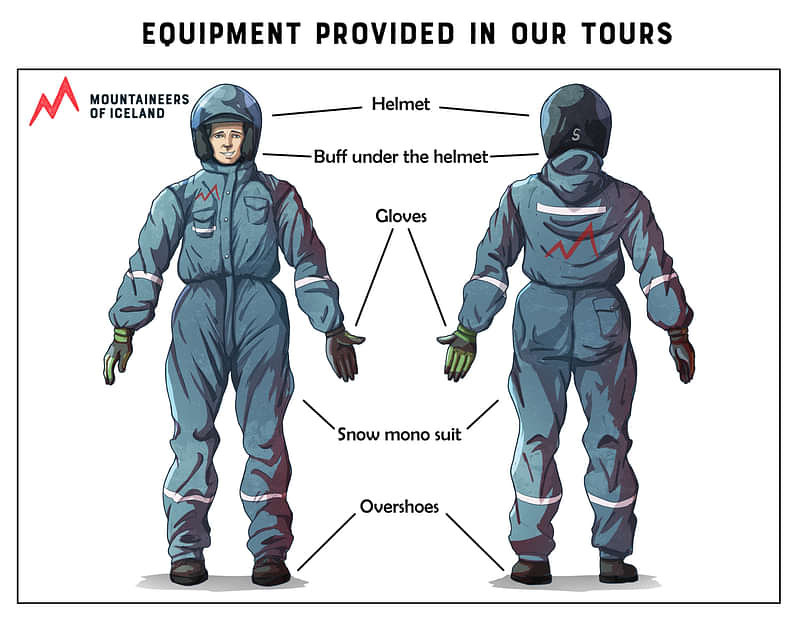 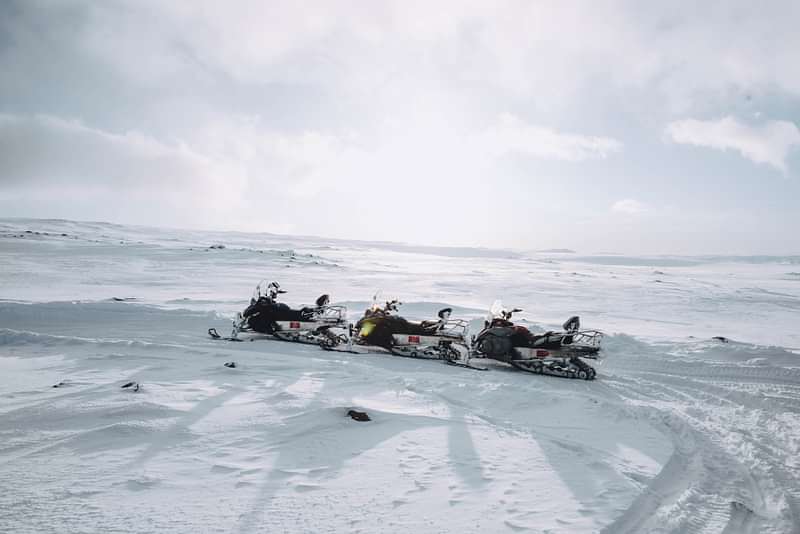 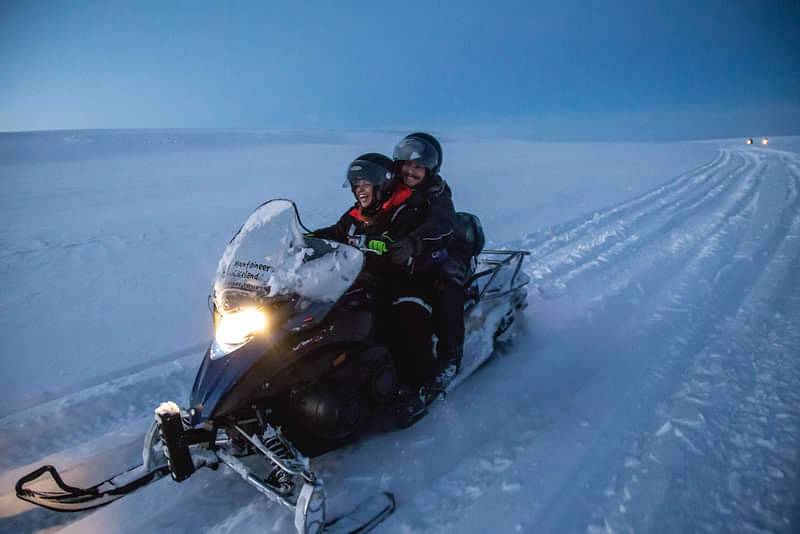 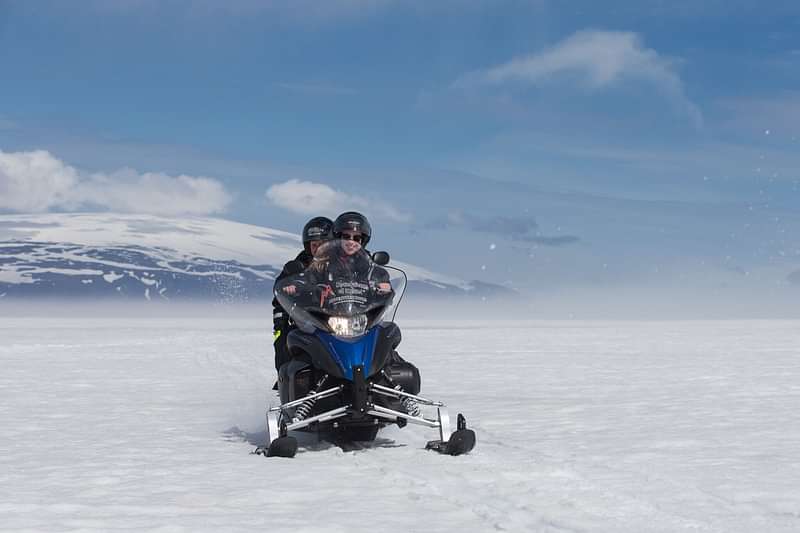 What do I need to bring

You are more than welcome to grab your backpack with you all the way. It´s a nice touch to bring some additional snacks and water as well as good winter clothing. A good camera is more than welcome and your smile would be much appreciated.

We accept these major credit cards.

Why book with us?

Our promise is to offer great products and superior customer service. If you need to cancel, make changes or help planning your vacation you can count on us to be there by your side.