This package includes the must-do Golden Circle with some the most famous sights of Iceland along with the South Coast including a visit to the black sand beach and some of Iceland's most beautiful waterfalls. 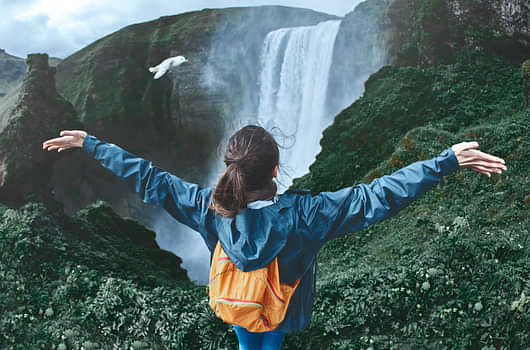 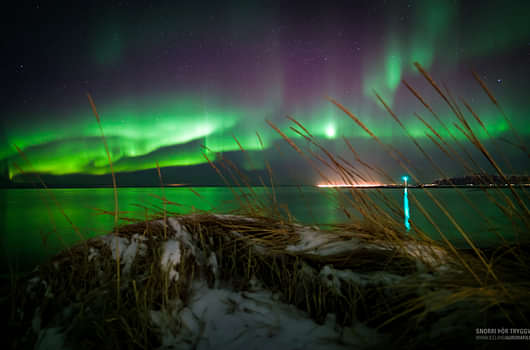 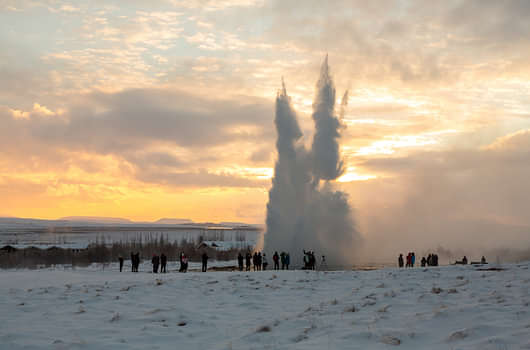 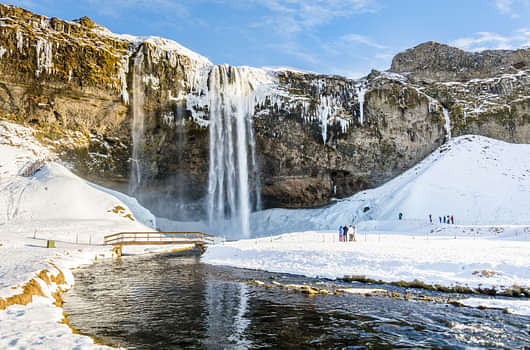 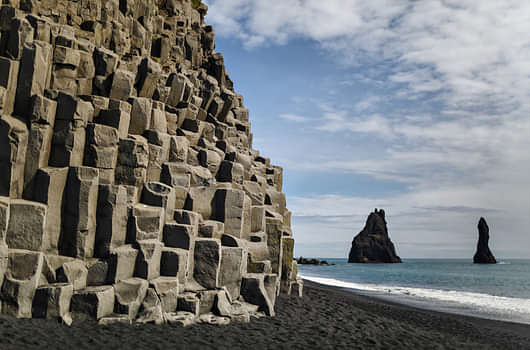 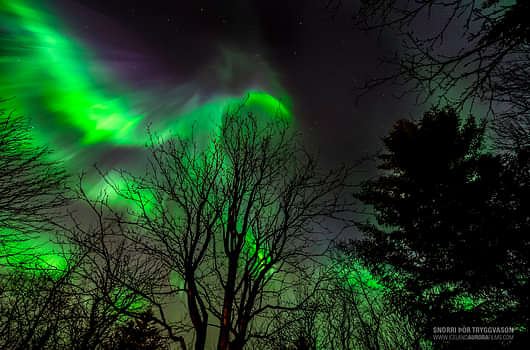 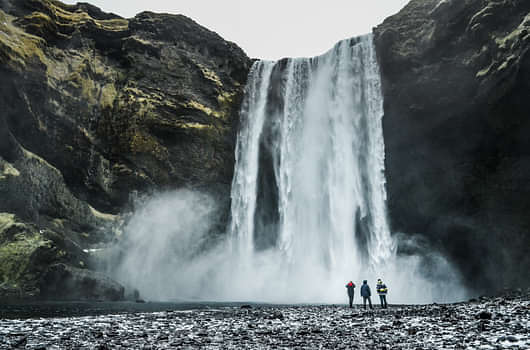 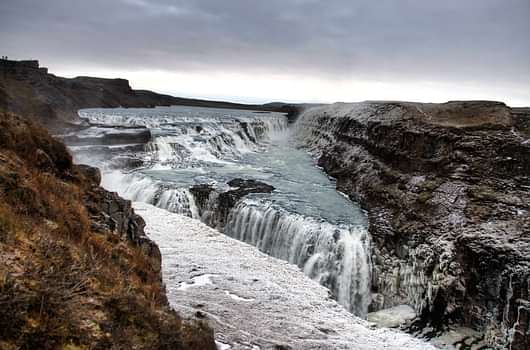 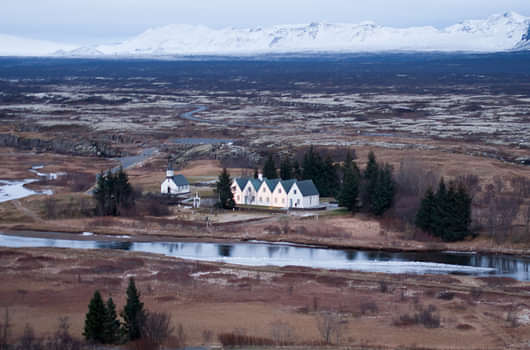 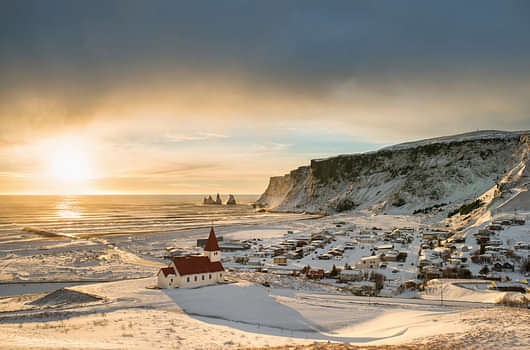 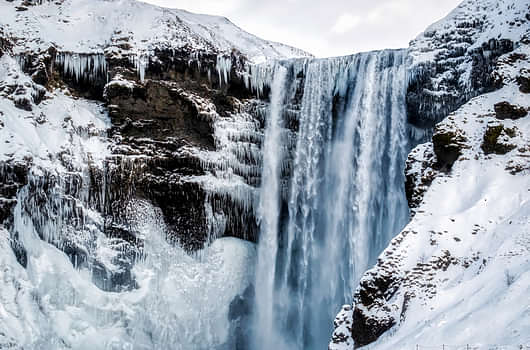 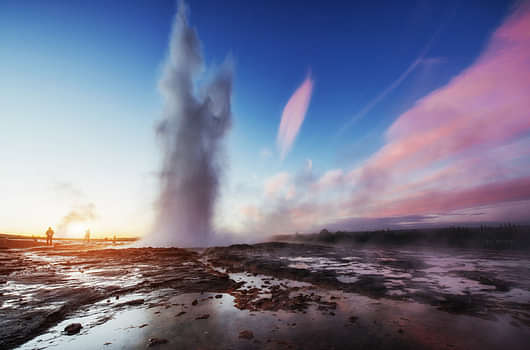 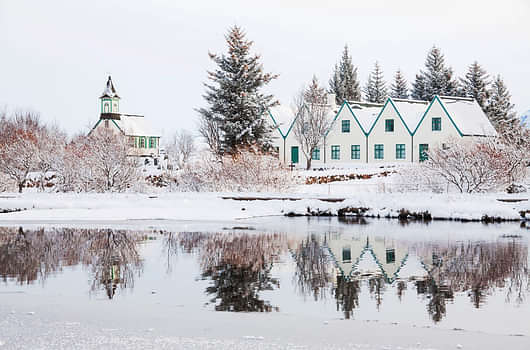 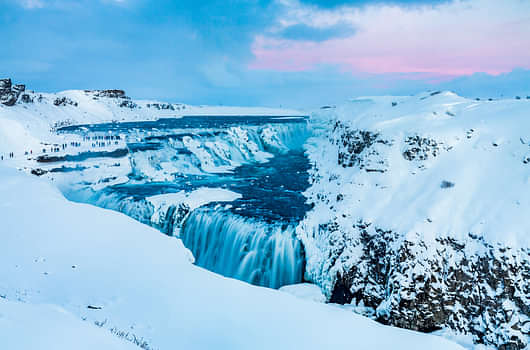 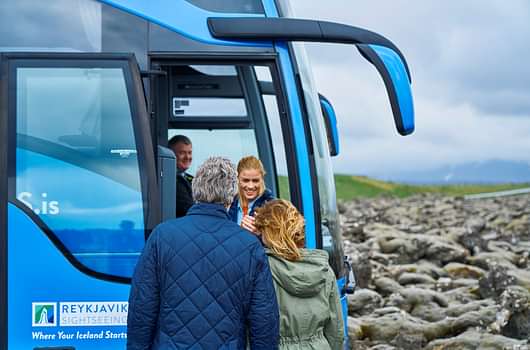 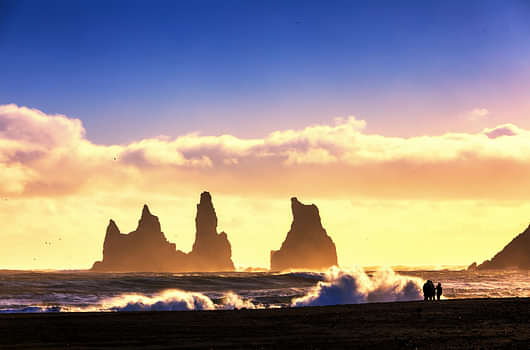 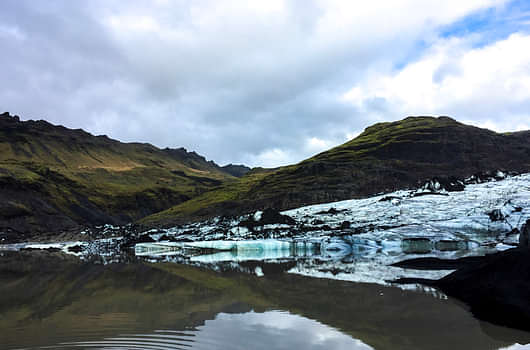 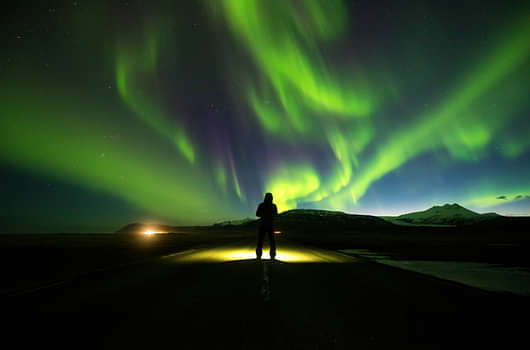 All in one! – Three must-do winter tours all perfectly packaged in one!

This easy travel package is for those wanting to explore the best of Iceland while staying in Reykjavík.
The package includes the must-do Golden Circle, which is comprised of three of Iceland´s most prized natural treasures.

First there's the powerful waters of a glacial river spectacularly cascading 32 meters into a steep canyon carved out millions of years ago in a massive glacial flood. Gullfoss Waterfall is so stunningly beautiful that Icelanders refer to it as the Queen of Icelandic waterfalls.

Next it´s on to Iceland´s only erupting hot spring or geyser, Strokkur, which spouts steam and hot water skywards every 7 minutes or so.

Finally, we visit Þingvellir National Park where the early Viking settlers established their national assembly in 930 AD. This would be the first major step towards defining a nation. Þingvellir is where the heart of the Icelandic nation beats. It´s where every major event in Icelandic history has taken place and where the country declared its independence on June 17, 1944.

When night falls we set off in search of the magical and mysterious Northern Lights.

On day two the South Coast awaits. Leaving Reykjavik we drive eastwards along the southern coastline and explore a volcanic and glacial wonderland.

You get to walk behind the thundering veil of spray at Seljalandsfoss Waterfall, take in the incredible views from the top of Skógafoss Waterfall and explore the Black Sand Beach at Reynisfjara before reaching our easternmost stop, the picturesque town of Vík. 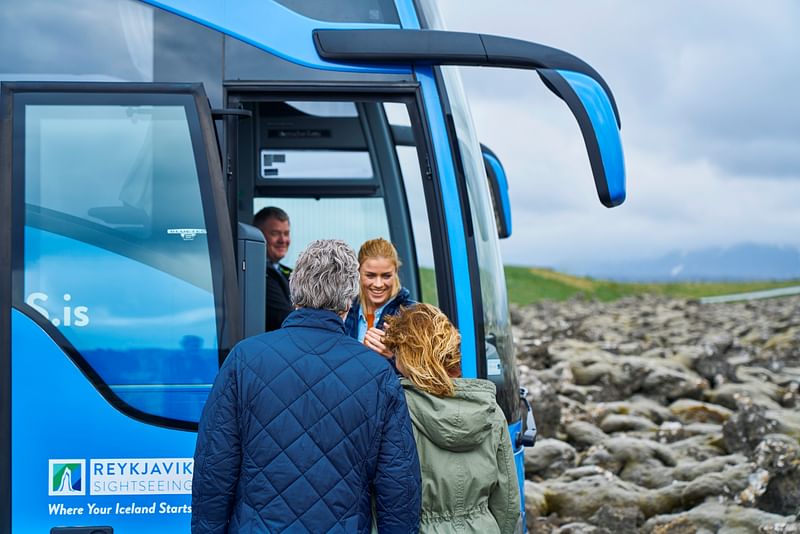 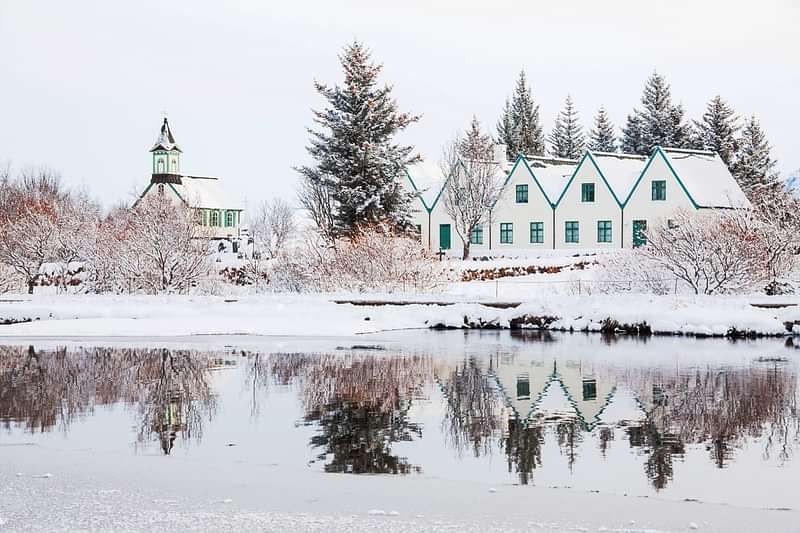 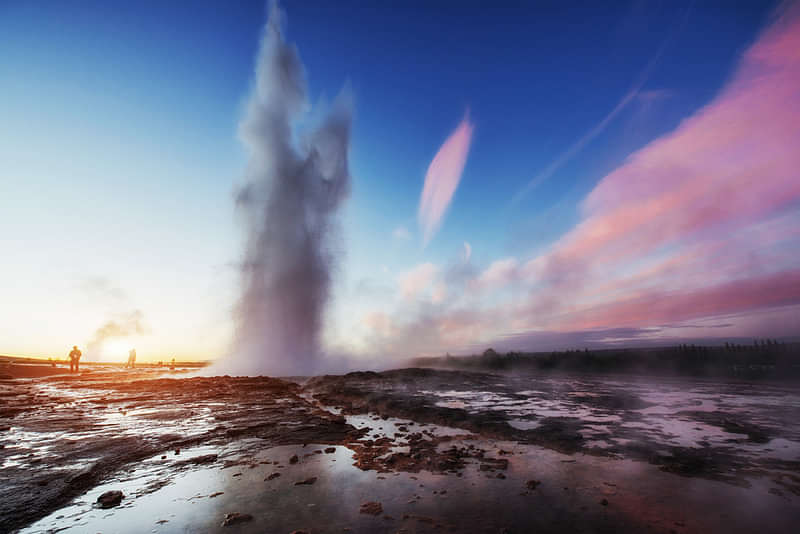 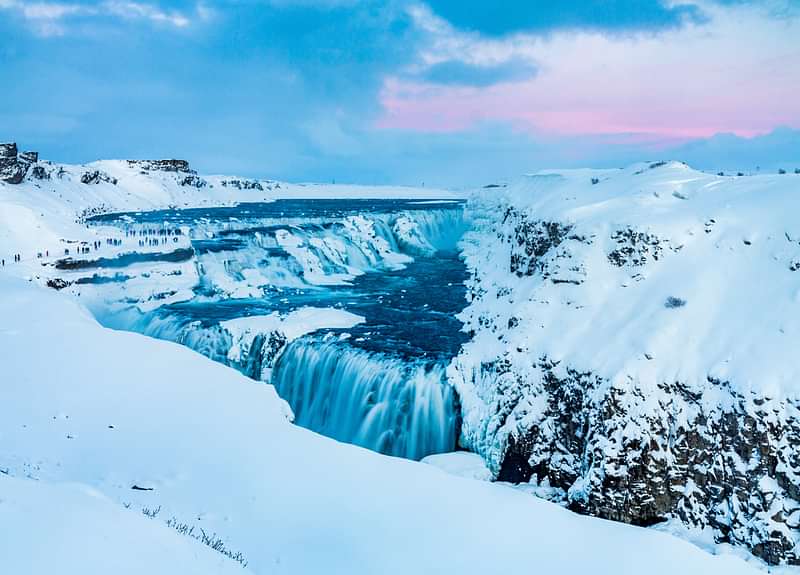 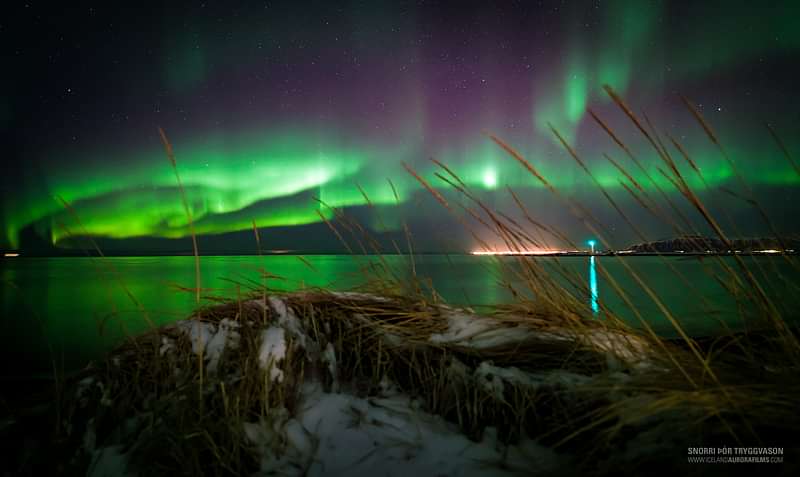 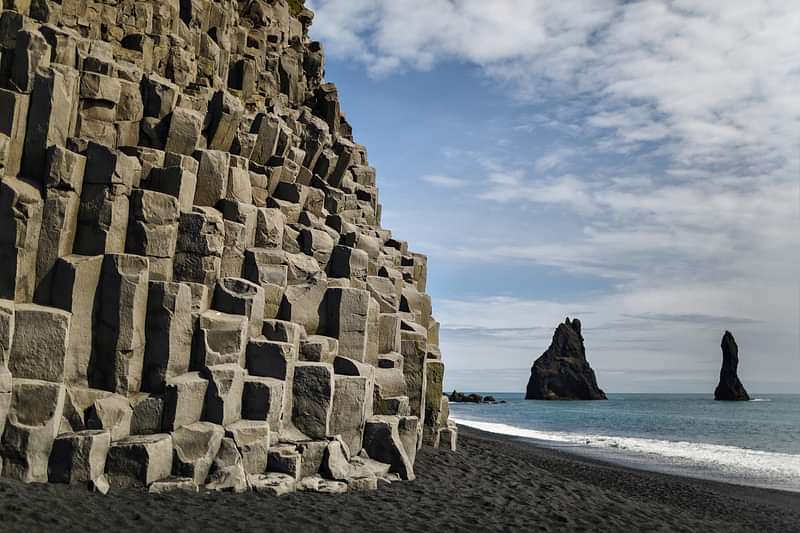 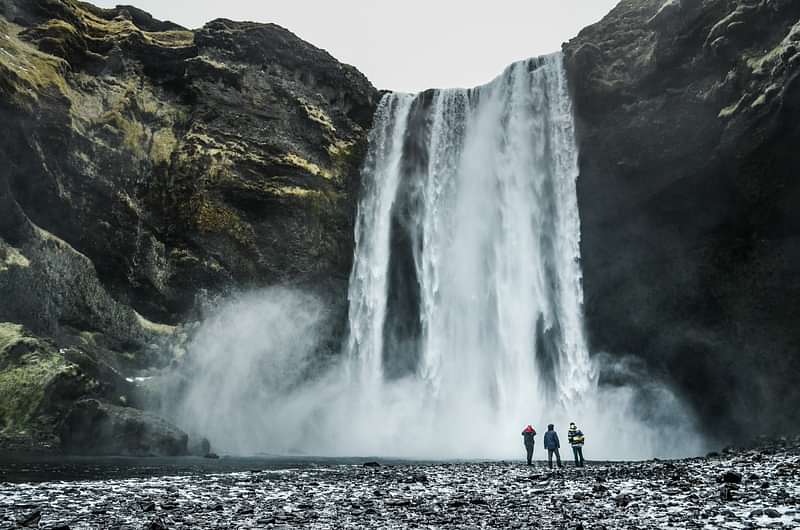 Þingvellir: the rift valley and the site of the oldest modern parliament.

Gullfoss Waterfall: the powerful glacial waterfall known as the 'Golden Waterfall' in English.

Vík: Iceland's southernmost town with beautiful houses under the church upon a hill.

Skógafoss: The powerful glacial waterfall with stairs leading up to one of Iceland´s most scenic views of glaciers, volcanoes, black sand beaches and possible sheep.

Seljalandsfoss: The 60-meter-high waterfall, famous for the hidden pathway which leads next to and around to the other side.

The starting point for both the Golden Circle and the South Coast tours is at Reykjavík Terminal, Skógarhlíð 10, 105 Reykjavík.

Tours depart from the Reykjavik Terminal located at Skógarhlíð 10. Please be sure to arrive 15 minutes prior to departure along with a printed or digital copy of your ticket/voucher.

If you have booked a hotel pickup with Smartbus™, please be at your chosen pickup location 30 minutes before the departure of the tour. Look for the Green Smartbus™ which will be outside your accommodation within 30 minutes of pickup.

The first stop along the Gold Circle features stunning views over the rift valley. A UNESCO heritage site with beautiful geographical features and rich political history.

Located on the northern shores of Þingvallavatn (Iceland's largest lake), Þingvellir (anglicized as 'Thingvellir') is the national pride of Iceland and our first National Park. It is, for one, a key location in Icelandic history as the oldest existing parliament in the world was first assembled there in 930 AD. For this reason, Þingvellir has been designated a UNESCO World Heritage Site and is, therefore, a protected national park due to its unique geology and natural features. From the viewing area, the Almannagjá canyon between two tectonic plates can be seen, a visual representation of continental drift.

As the first stop along the tour, you will have an opportunity to walk through the park and use the restroom if needed.

The most iconic Iceland natural site, the Geysir hot springs are home to the original erupting geyser.

A favorite stop along the Golden Circle is the highly active Geysir Hot Spring Area with boiling mud pits and the lively Strokkur which spouts water 30 meters (100 ft) into the air every few minutes. The area became active more than 1000 years ago and comprises more than a dozen hot spring holes. Although one can only see steam emerging from the surface of Geysir these days, its name was adopted to represent spouting hot springs all over the world.

Along the tour, the newly opened Geysir Center offers guests and travelers a chance to use the restroom and to catch some refreshments as well as lunch.

A powerful and inspiring place. There the glacier water thunders down 32 meters in three steps and into a narrow canyon with a breathtaking roar and grandeur.

As one of the most popular attractions in all of Iceland, Gullfoss is a waterfall located in the canyon of Hvítá river in the southwest of the country. The beautiful Hvítá river rushes southward in three steps into a narrow canyon with a breathtaking roar and grandeur. Furthermore, on clear days the magnificent Langjökull glacier, Iceland's second largest glacier, can be seen in the distance.

Guests and Travelers may use the restroom and purchase food and refreshments at this location as well.

In the evening after returning to Reykjavik, you will head out into the night to look for the elusive aurora borealis

After a day of touring around Iceland's most popular sites, you will join us on a hunt for the northern lights. Our knowledgeable northern lights guides will be happy to share stories and information about this ever-elusive phenomenon.

On the second day we head down the southwest coastline from Reykjavík into the volcanic and glacier-covered wonderland that is Iceland's south coast. Walk behind the thundering veil of spray at Seljalandsfoss Waterfall and take in the incredible views from the top of Skógafoss Waterfall.

Reynisfjara Black Sand Beach is another picturesque spot. There the waves crash on the black sands, the jagged basalt sea stacks and the huge basalt column cave are sights not soon forgotten.

This is one of the most famous and most visited sites in all of Iceland. Marvel at the unique volcanic black sand beach of Reyisfjara with rising basalt columns, a large basalt stone cave that has been battered by heavy oceanic waves.

There is a cafe located at Reynisfjara where you can buy some snacks or use the restrooms if needed.

This is Iceland's southernmost town with beautiful houses under the church upon a hill. There is a great view of the three trolls out in the ocean along with a second black sand beach.

The quaint town of Vík is Iceland's southernmost town with a traditional Icelandic church overlooking the ocean and the three trolls of the black sand beach. At this stop, you will have a chance to grab some lunch & use the restroom, explore the town, spend time at the beach, or do some souvenir shopping at Icewear's outlet store. This is the farthest point along the south coast tour, from here we will head back in the direction of Reykjavik.

The powerful Skógafoss waterfall where a short walk up a flight of stairs will reveal one of Iceland´s most scenic views, glaciers, volcanoes and black sand beaches.

Along the return trip to Reykjavik, we will stop at the powerful 65-meter-tall Skógafoss Waterfall where a short walk up a flight of steps will reveal one of Iceland´s most scenic views of glaciers, volcanoes and black sandy beaches. With viewpoints both above and directly next to the waterfall, photographers will have plenty of chances to capture that unique shot.

Seljalandsfoss waterfall, famous for the hidden pathway behind and around it.

The Seljalandsfoss waterfall is for many guests the highlight of this trip, as you can walk along and behind this waterfall offering a completely unique perspective; just be sure to bring a rain jacket! From here we will spend about 1.5hrs in the coach returning to Reykjavik.

We accept these major credit cards.

Why book with us?

Our promise is to offer great products and superior customer service. If you need to cancel, make changes or help planning your vacation you can count on us to be there by your side.